Linux Programming ,Linux Kernel
NOTE:Tutorials on Linux at the end of the page

Linux is an Unix type of operating system designed for computers.It is a open source and free.Linux Kernel is freely available kernel.org.Linux first initial release was on 1991 and Linux 0.01 is available at downloads.It has been ported to many hardware platforms than any other operating system.Linux is used in big room sized iron machines(mainframes,etc) and 95% of the worlds supercomputers run with a variant of Linux.It started all by one person, Linus Torvlads, chairman of Linux.One common mistake that the programmers think is that Linux is an operating system, that is wrong, the right is Linux is a kernel. 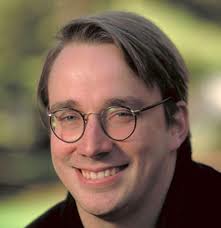 Linus Benedict Torvlads ,born on December 28 1969 in Helsinki, Finland.He is the first Finnish American Software Engineer and hacker and known for his Linux Kernel.He also invented the revision control system GIT.This system widely used in the current world.Linus Torvlads kept Freax, a mix of "free,"freak' and "x" for UNIX type system.But the got changed , when his friend named Ari Lemmke who administrated a FTP server where Linus System was hosted, he gave the name Linux as the name of the directory on the server.So nice story!!.An approx of 2% of Linux was written by Linus himself.That 2% is a large amount of contribution as there were 1000's who contributed for Linux.He is now the chief of the Linus Mark Institute , http://www.linuxfoundation.org/.Here are few training on Linux Kernel.
Image:A image showing a photo of Linus Torvlads